The Bears traveled to Spartanburg, South Carolina and defeated the Wofford Terriers 42-7 this past Saturday. This brought their record to 4-1 in the regular season and 2-0 in Southern Conference play.

Some notable game plays were the two interceptions by Juwan Johnson and TJ Moore that gave the Bears multiple opportunities to get the ball back and score. Fred Payton threw for 330 yards with a 83% completion rate. His main target was Devron Harper who made seven catches for 126 yards and had three touchdowns.

The Bears will take on Western Carolina University on Saturday at Five Star Stadium.

Read more: Bears on a hot streak after securing third win in a row against Wofford

Saturday, the Bears traveled to Louisville, Kentucky to race at the Live in Lou Cross Country Classic. They finished 27th of 31 teams, but among SoCon teams, they came 2nd of 3. Graduate student Vladimir Zander-Velloso led the team with a 24:41, good for 81st overall in a field of 301 runners. Not far behind was Jonathan Greene ‘25 with a time of 24:59, whose pace was an impressive 5:01.

Their next meet will be at the USC Upstate Invitational in Spartanburg, South Carolina on Oct. 15.

The Bears hosted the Georgia Southern Eagles (1-8-0) on Tuesday night, winning the non-conference game 1-0. The team is credited with scoring the lone goal after Ousman Jabang shot from the 6-yard box and an Eagle defender slid to break up the pass but accidentally scored for the Bears. Overall, the defenses were stout, allowing only three goals on target total in the game. The SoCon defensive player of the week, Sekou Agard ‘25, had one of Mercer’s two shots on goal on his way to helping Mercer get its first clean sheet of the season.

In their SoCon opener, Mercer tied the Terriers of Wofford (3-5-2), 0-0. In his third start of the season, Brant Zulauf ‘23 had four saves. Dylan Gaither hit the woodwork in the second half, but no shots went the Bears’ way.

On Tuesday, Mercer (4-2-5) will have their last home game until Oct. 22. They will play Lipscomb University at 6 p.m.

In Louisville, Kentucky, the Bears impressed with a finish of 16th out of 47 teams. Brianna Teegarden finished first on the team with an 18:51. Her time put her at 63rd overall among a large group of 419 runners. Giulia Giorgi ‘23, Laney Doster ‘25, Leah Pfaff ‘26, Iris Porter ‘26 and Reese Robertson ‘25 all finished within a minute after their leading teammate, which gave the team the 5th fastest split among the top 16 teams, at 0:47.

Their next meet will be at the USC Upstate Invitational in Spartanburg, South Carolina on Oct. 15.

In the Golfweek Red Sky Classic in Vail, Colorado, the Bears finished 8th of 20 total teams. The team finished with an overall score of 3 over par, led by Kate Song ‘25 and Carmila Järvelä ‘24 who each finished tied for 43rd. Tracy Rodriguez ‘23 had the lowest single round of the team, finishing at 2 under par on the second day of the tournament.

Their next tournament starts on Oct. 17th, hosted by Mississippi State University.

In their third game of SoCon play, Mercer tied ETSU (2-5-3) at home on Thursday, 0-0. The Bears didn’t lack offense, however; the team had 26 shots all night and 13 were on target. ETSU was hampered by an early red card, which came in the 26th minute against Sinoxolo Cesane who was playing well before her ejection. Forward Ciara Whitely ‘23 had the best chance of the game, hitting the crossbar from a shot just inside the 18-yard box.

On Sunday night, the Bears won an important SoCon game, 2-1 against Western Carolina University (2-5-4). Jada Moorman ‘26 scored a first-half brace, netting both goals in a ten-minute span from the 22nd minute to the 32nd. Jamie Hlebec ‘24 registered her first assist of the season on Moorman’s second goal of the night.

The Bears played Chattanooga on Friday and East Tennessee State University on Saturday. They swept the Mocs 3-0 but fell 3-1 to the Pirates.

Annie Karle totaled 10 kills against Chattanooga while Lillian Beardsley and Paige Wagers trailed close behind with nine and eight respectively. The three also had a combined 10 blocks that helped the Bears to their victory. Lexi Uhrahn led with 10 digs in the game.

Karle led in kills again against ETSU with a total of 16. She also had nine digs and two blocks, putting up a fight for the Bears. Uhrahn reached a season-high 22 digs against the Pirates, but the Bears could not come up with the win.

The weekend brought their record to 5-11 and they will play Furman University on Oct. 7 in Greenville, South Carolina. 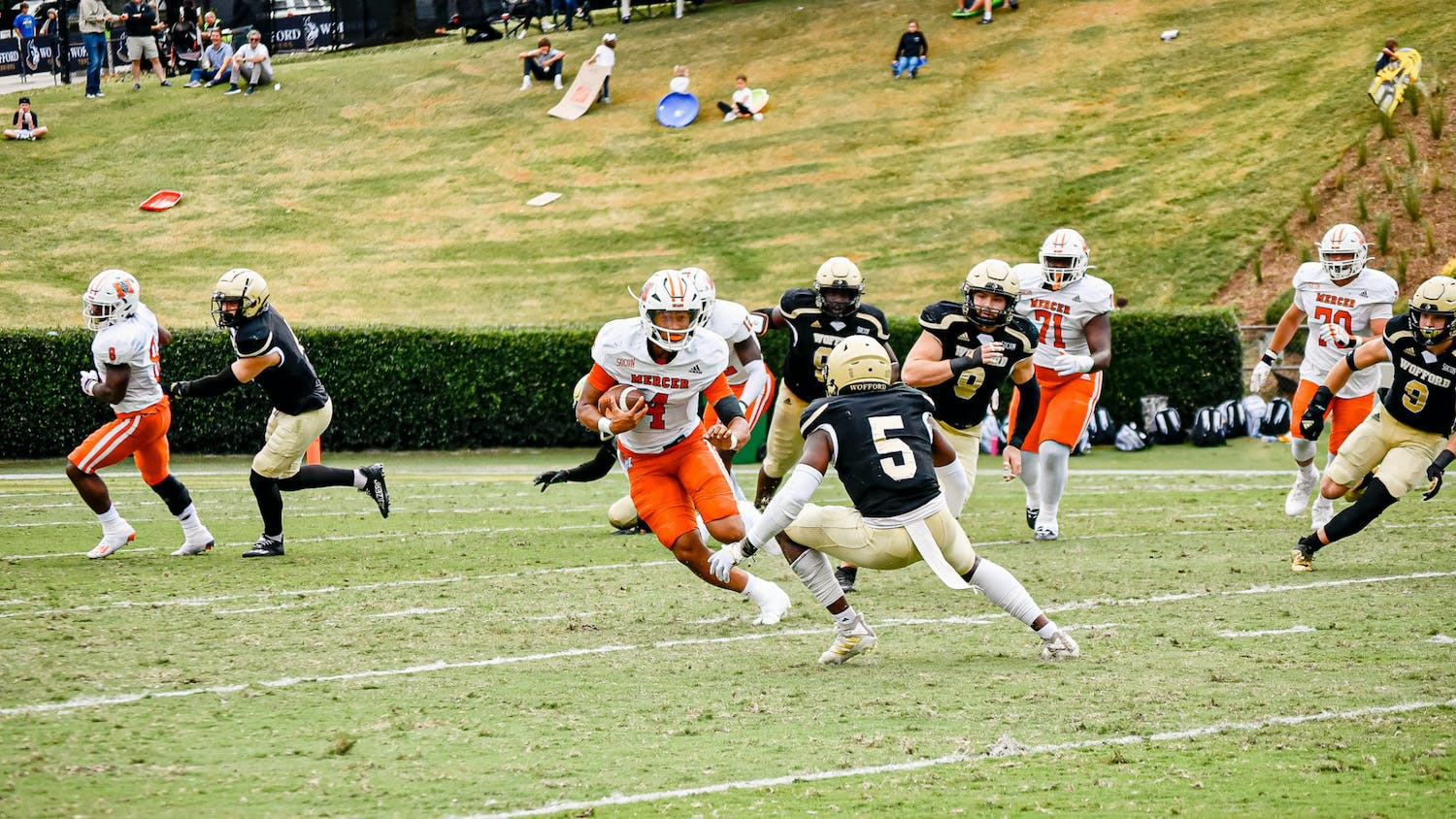